From 29 June until 1 July the seventh European Conference on African Studies was held in Basel, Switzerland. The theme was ‘Urban Africa, Urban Africans: New encounters of the urban and the rural’. The conference attracted a record number of participants who delivered high-quality presentations, showing that the field of African studies is booming throughout Europe.

There were a good number of panels dealing with Central Africa (Zambia-Congo) and mining. Deborah Bryceson and Katja Werthmann organised a panel on ‘Mining and urbanization in rural Africa’, problematizing how artisanal mining impacts on processes of urbanisation. Sara Geenen convened an excellent panel on ‘Labour (markets) in extractive industries’, which looked at the crucial issue of labour in mining in the contemporary period. Benjamin Rubbers presented on labour on the Congolese Copperbelt. Rita Kesselring and Alexander Caramento hosted a panel on ‘(Infra)structures of extraction in Africa’, with a presentation by James Musonda on the Zambian Copperbelt. Duncan Money convened a panel on ‘Economic and financial histories of Central Africa’, with presentations by Jessica Achberger, Jan-Bart Gewald and Iva Peša on aspects of Zambian economic history. Furthermore, the Congo Research Network hosted social events and Copperbelt researchers from the Zambian and Congolese sides met up informally, including for a swimming trip in the Rhein River. 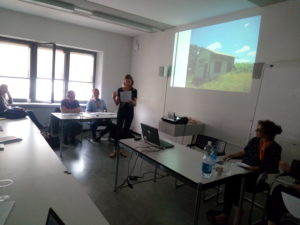 Miles Larmer and Benjamin Rubbers convened a panel on ‘Political cultures in the Central African Copperbelt’. This panel analysed political cultures in Copperbelt towns from a comparative and historical perspective, with presentations on both Zambia and Congo. It problematized how ideas on political authority and social change have been interpreted and understood in Copperbelt societies. Sarah Katz-Lavigne presented on ‘Corporate strategies, property rights, and distributional outcomes in the Democratic Republic of Congo’s copper and cobalt sector’. She questioned how property rights have been reconfigured in the recent mining boom. She situated mining company security strategies in a local socio-historical context and talked about the distribution of both risk and profit in mining. Stephanie Lämmert gave a talk about ‘Spiritual identities in the Central African Copperbelt’, highlighting urban spirituality and unconventional interpretations of the gospel on the Copperbelt. Analysing spirituality on the Copperbelt provided a way into debates on rural-urban difference, preaching and missionary activities. Kristien Geenen presented on ‘Trade unions and political culture(s) in the mining area of Kolwezi’. She vividly portrayed the fragmentation of the union field in Kolwezi and argued that there are almost too many unions in the city. Analysing the relationship between unions, employees and employers, she illustrated the relatively weak position of unions despite their proliferation. Thomas McNamara gave a presentation on ‘Everyday unionism as a political act: Utilisations and creations of union discourse in everyday actions.’ This presentation provided ethnographic insight into branch level union staff, processes of gift giving and the relationship between unions and mineworkers. The panel attracted a good crowd and generated a lively discussion. Among other things, the discussion touched upon the issue of historicity and memory and the way nostalgia shapes reflections of a “golden past” of prosperity from the viewpoint of mineworkers, union officials and spiritual leaders. It was a great opportunity to bring Copperbelt researchers together.