A landmark event for the ‘Comparing the Copperbelt’ project took place in the Zambian copperbelt city of Kitwe on 23-24 July 2018, when a two-day workshop (click here for programme) organised by the project brought together around 40 historians and social scientists from the Democratic Republic of Congo, Zambia and further afield to analyse and compare the linked histories of Haut Katanga and the Zambian Copperbelt. The conference was organised in partnership with the History Department of the University of Zambia (UNZA), Copperbelt University (CBU), and the University of Lubumbashi (UNILU), and was also attended by representatives of labour unions, environmental movements and cultural organisations.

Conference participants explored and explained the similarities and differences in the histories and more recent development of the two Copperbelt regions. In a keynote address, Prof Donatien Dibwe dia Mwembu of UNILU explained how, during World War Two, mineworkers in both Northern Rhodesia (colonial Zambia) and the Belgian Congo protested their poor conditions by strike action that was violently repressed by colonial forces. After the war, conditions were significantly improved in Congolese mines, and social provision – housing, education and social services – was rapidly improved, creating considerable industrial harmony in an atmosphere of authoritarian paternalism that however enabled significant social mobility.

Across the border, Miles Larmer explained in the second keynote lecture, the mines of Anglo-American and Rhodesian Selection Trust were slower to change: here, the African Mineworkers’ Union (AMWU) played a decisive role in winning better wages and conditions and challenging the racial colour bar that reserved senior jobs for whites. This generated a sense of collective identity among the cosmopolitan Copperbelt community, which went on to play an important role in the struggle for independence. In contrast, Congolese mineworkers were less central to the nationalist movement in Congo, which was also affected by ethnic divisions including those in Katanga between self-declared ‘indigenous’ societies and migrant workers from the Kasai province.

Both regions have subsequently experienced parallel changes, from a period of relative growth and nationalisation in the 1960s and early 1970s, followed by the collapse in copper prices and economic decline, and the subsequent economic liberalisation and privatisation of the 1990s. But significant changes have also continued to affect the different regions: for example, the prominent role of Copperbelt politicians and labour leaders in Zambia’s pro-democracy movement and the country’s subsequent governments. Katanga, in contrast, has usually been marginalised from central Congolese politics and has experienced warfare and ethnic conflict as well as economic decline. 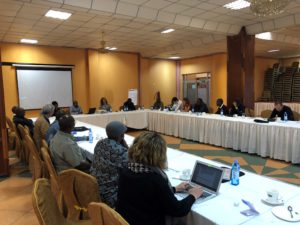 Although these are regions defined by the presence of strategic minerals, conference participants heard that academic research has commonly focussed solely on the mines and their workers, neglecting their wider population and their social and economic activities. Arguably the largest group of Copperbelt workers historically has been women farmers, who played a central role in feeding the new urban communities but whose contribution was often ignored by both mine companies and by academic researchers. Likewise, the majority of Copperbelt residents, who migrated to town with hopes of a better life but who didn’t obtain a job in the mines, have received little attention. However towns such as Luanshya, Chingola and Mufulira were shaped just as much by the residents of council areas and informal settlements as by the employees of ZCCM.

In analysing the history of the Zambian and Congolese mining industries, presenters asked whether these countries’ copper dependency and/or their post-1975 economic decline could have been avoided. Dr Hyden Munene analysed the Rhokana Corporation in the first years of independent Zambia, exploring its economic relations with the new government of the United National Independence Party (UNIP). Ingeborg Guldal meanwhile highlighted the role of the Intergovernmental Council of Copper Exporting Countries (CIPEC), which brought together four copper producers including Zambia and Congo in their efforts to add value to their copper by controlling exports – just one of many attempts by both countries to overcome neo-colonial dependency by adding value to their key mineral resources and diversifying their economies. 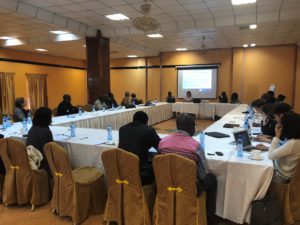 Other papers focused on the contemporary cross-border Copperbelt, though even here comparisons with historical events weren’t far away. Robby Kapesa (CBU) contrasted the ‘old’ Zambian copperbelt to its ‘new’ cousin in North-Western Province: while the former is known for its ethnic harmony, the allocation of land and the distribution of jobs in the latter is creating divisions between residents and new migrant workers in a way that, Kapesa suggested, resembles Katanga’s earlier development. Twenty-first century mine companies are far less willing than their twentieth century predecessors to take social responsibility for their workers, and their mines create far fewer jobs than in the past. Aubrey Chiwati explored the role of civil society in persuading today’s mining companies to take responsibility for the impact of their activities and to share the proceeds of their operations with local communities.

Jennifer Chibamba Chansa (University of Free State) meanwhile contrasted the environmental practices of the old and new Copperbelt: mining has created significant pollution in almost all mine areas worldwide, but contemporary mining companies are expected to take responsibility for the environmental effects of their activities – though it is clear that some still evade their legal obligations to do so. Iva Pesa (Oxford) explored the contrast between the clear evidence of widespread environmental damage done in the past and the virtual silence among yesterday’s policymakers, companies and even mine unions about pollution, for example of sulphur dioxide emissions (‘senta’) in Mufulira. James Musonda (University of Liège) explored how safety regimes in Zambian mines have changed over time: although accident levels have apparently improved, it may be that many accidents are not being recorded in official statistics and the precarious position of contemporary miners, especially among sub-contracted workers, may itself present a threat to their health and safety.

A further set of presentations discussed the cultural history of Copperbelt towns. Dr Hikabwa Chipande (UNZA) explored the role of football, which he persuasively demonstrated was central to the culture of mine towns in both Zambia and Congo. Patrick Mudekereza (Waza arts centre, Lubumbashi) discussed the role of arts and artistic centres in both the DRC and Zambia, while Enid Guene (Oxford) explored how music and other arts have both entertained Copperbelt residents and helped them make sense of their changing lives.

A central aim of the Comparing the Copperbelt project is to facilitate the exchange of ideas between African researchers, without imposing – as was so often the case in the past – a Western academic understanding of the Copperbelt region. At the Kitwe event, 11 of the 19 presenters were from the DR Congo and Zambia, as were all the chairs/discussants. James Musonda escorted Congolese visitors on a visit to Wusakile township so they could appreciate at first-hand the ways in which Zambian mine towns and their communities both differ and resemble those in Katanga. A second conference will take place in Lubumbashi in 2019, an event which we hope will deepen further the relationship between Congolese and Zambian scholars of the cross-border copperbelt and enable them to more effectively participate in and inform international scholarship on mining societies and historical change.