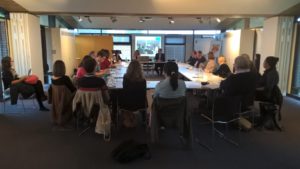 The historiography of the Zambian Copperbelt is very much influenced by the seminal literature produced by scholars of the Rhodes Livingstone Institute. To a large extent RLI scholarship of the 1940s and 1950s sought to paint a progressive image of an urban, secular and quickly industrializing society swiftly advancing towards modernity, a society which transcended narrow ‘tribal’ or religious identities on its road to a unifying national identity. As a consequence, knowledge production about the Copperbelt is characterized by a strong dichotomy between the rural and the urban, the secular and the religious. Similarly, many studies on spiritual expression and mission Christianity in Africa reinforce the rural-urban divide. In addition, these studies also obscure interdenominational fluidity by focusing on one particular mission society or church, thus overlooking the openness and inter-change of spiritual forms that characterizes Copperbelt spirituality until today.

Challenging those approaches, the ‘urban spirituality’ research seminar held as part of the ‘Comparing the Copperbelt’ project at the University of Oxford on the 8th of June, 2017, focused on the crossing of boundaries – spiritual boundaries between denominations, between the rural and the urban, and between colonies and nation states. Are the forms that urban spirituality takes distinctly different from rural religious practices? What are the reasons that make African Christians criss-cross between denominations? In what ways and to what extent did mission-initiated churches shape the spiritual identity of Central African believers? And how can spiritual practices contribute to a broader picture of Central African history? These were the questions which the research seminar addressed. 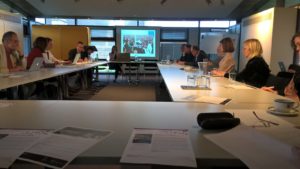 In a stimulating paper on the Anglican Church in Congo, Emma Wild-Wood showed how church members of the diocese of Kindu challenged local and national identities and boundaries as they actively associated with the Anglican church as a global body. At a time when some Africans experienced nationalism as suffocating, the church offered membership in a trans-national community. The sense of belonging to a worldwide church offered a positive identity and an opportunity to voice criticism by Congolese Anglicans dissatisfied with national developments. By showing the various levels of identification offered by the Anglican Church in Congo – local, national and global – Wild-Wood gave a fine example of how to take a church as a primary unit to analyse identities and spiritual expressions that transcend the nation-state.

In his paper on the Benedictine mission on the Congolese Copperbelt in the first half of the twentieth century, Reuben Loffman challenged another boundary, that between the rural and the urban. While rural Benedictine mission stations have long been portrayed as a failure, Loffman demonstrated – in a fascinating paper based on previously unseen source material – that the rural stations were more successful than previously thought. By doing so, he emphasized the artificial nature of the binary division between the rural and the urban. Loffman also showed the intimate political and economic entanglements between the Roman Catholic Church and the Belgian colonial state in Katanga when it came to labour recruitment for the nearby mines and the question of education.

In my own paper, I argue that the weakness of denominational boundaries on the Zambian Copperbelt can be understood as the consequence of the variety of mission societies active in the copper towns. However, while the sheer opportunity of choice was distinct to the urban environment and has produced distinct urban spiritual structures, the phenomenon of spiritual fluidity and the weakness of religious boundaries is by no means only an urban phenomenon. Contemporary research increasingly links the success of the Pentecostals and the charismatic movements to the challenges brought about by the neoliberal order since the 1990s. However, my paper shows the need to historicize the emergence of healing ministries and hybrid forms of spirituality by taking into account the long history of healing institutions in the region.

Naomi Haynes presented an exciting paper on the recent entanglements of Pentecostalism with politics in contemporary Zambia, addressing the blurring of the boundary between the secular and the religious. She analysed the unsuccessful presidential campaigns of Nevers Mumba, one of Zambia’s most famous Pentecostal leaders. Haynes argued that the capacity for religious mediation is more important to Pentecostal believers than questions of morality. Because Mumba lacked these mediation qualities, his presidential bids failed despite the fact that Pentecostalism in Zambia has experienced an enormous rise in the past three decades. Haynes’ more general argument is that Pentecostalism changes the face of populism, as populist politics and populist religion overlap considerably. 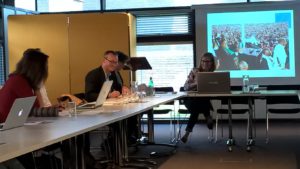 The ensuing discussion, stimulated by the discussants, Ramon Sarró and Miles Larmer, similarly evolved around the challenging of existing binaries in Central African studies of spirituality. Both highlighted the artificial nature of the urban-rural divide by calling for a better understanding of the imaginary connections in the process of ‘inventing the urban’ as well as by tracing the ‘material’ links between the urban and the rural. In the general discussion, the significance of the border-crossing of spiritual ideas, concepts and people was discussed. It was argued that these border-crossings provide a useful challenge to the static image of impermeable boundaries, be they of a religious, temporal or spatial nature. The research seminar showed that religion and class-consciousness were (and are) not necessarily opposed to each other. The rural and the urban are similarly better understood in one analytical framework. And religion and politics were linked with each other long before the Pentecostal boom.