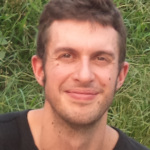 My fascination for African history in general and Congo in particular emerged during the second year of my BA in History at Saint-Louis University in Brussels, when students following Prof. Nathalie Tousignant’s research seminar had to work on Belgian colonialism. I was immediately excited by the sources I consulted, and how they reflected the complexity of Belgian Congo’s society. I was particularly struck by the distance separating its assertive self-representations from its unsound domination on the field. The following years, Prof. Tousignant encouraged me to work on recently digitized movies from the colonial era, sources that had been little used by historians. For my Master thesis at Brussels Free University (ULB), I therefore focused on the representation of Congolese bodies in colonial filmed travelogues, and had the opportunity to present my findings at a conference in Bujumbura.

As the taste of colonial archives gave me the will to pursue further research, I embarked in 2012 in a doctoral thesis, again at Saint-Louis and under the guidance of Prof. Tousignant. I moved away from visual sources, and focused on the micro-history of power, ecology and labour in the Leverville circle, a palm oil concession in Southwest Belgian Congo. I crossed administrative despatches and reports with oral memories I collected in the former concession in 2015, to craft an exhaustive portrait of everyday experiences in Leverville, between 1911 and 1940. Those sources provided an invaluable insight into the inner workings of colonialism on the field. It allowed me to observe the brutality of forced recruitment, the makeshift arrangements concluded between local public servants and company managers to rule over the concession, and Congolese workers’ practices of sense-making, adaptation and displays of unruliness that significantly impeded on European longings for hegemony.

I am extremely happy to join the “Comparing the Copperbelt” team. After many years of researching the colonial era, I am looking forward to focusing on the Congo’s transition to independence and its first, turbulent decades in Haut-Katanga. Using the mining town of Likasi as my main field of enquiry, I intend to study the transformations of collective identities and social life from the late 1950s to the mid 1980s. Different polities – Belgian Congo, the State of Katanga, Zaire – succeeded to one another, each claiming their own legitimacy, values and understandings of collective belonging. I will investigate how mining communities responded and participated to these political endeavours. As the UMHK/Gécamines, Katanga’s dominant private actor, progressively lost power and influence, I am interested in investigating the role it effectively played in shaping the workers’ identities and everyday lives in a context of political turmoil and economic angst. Likasi, a former colonial “model-city” in the heart of Haut-Katanga’s mining zone, also provides a fascinating field to pursue research on failed political and economic ambitions, and how they shaped its inhabitants’ visions and hopes for the future. I am very excited as well to perform team research and work with my colleagues on issues of environmental history, urban missions and knowledge production in and around Likasi.