Conference report by Miles Larmer and Benoit Henriet of the ‘Comparing the Copperbelt’ project.

On 26-27 April 2018, the University of Oxford played host to the latest biennial conference of the Congo Research Network, and to more than a hundred researchers in the history, politics, society, culture and economy of the Democratic Republic of Congo (DRC). The event, financed by the ‘Comparing the Copperbelt’ project, Oxford’s African Studies Centre and its Faculty of History, was hosted by St. Antony’s College.

The conference, with the theme of ‘Congolese Studies: Past, Present, Future’, was organised into 15 panels on diverse themes examining the country’s civil society, visual art and culture, colonial legacies, material culture, rebel governmentalities, political culture, religious beliefs and practices, natural resources and waterways. Some researchers focused on micro-level examinations of everyday life at village level, whilst others placed the DRC in cross-border comparison with its neighbours and still others, challenging the mainstream media’s presentation of the country as lawless and ‘exotic’, demonstrated its centrality to globally significant flows of resources, people and power. 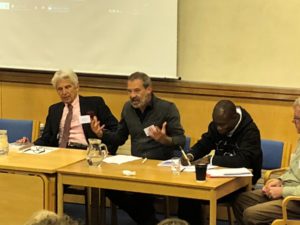 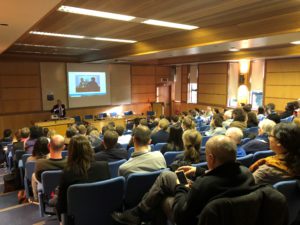 The highlight of the conference was the keynote address by Prof Bogumil Jewsiewicki Koss, one of the most eminent historians of the Congo since the country’s independence. In a powerful presentation, Prof Jewsiewicki explained the interaction between post-independence Congolese history and his own intellectual journey from a focus on political and economic history to one that has explained historical change via a focus on social and cultural change. This was vividly illustrated by an analysis of Congolese visual art that has provided a key focus for Jewsiewicki’s work, and which itself provides a powerful popular narrative of the country’s own tumultuous history. Prof Jewsiewick’s presentation was followed by a roundtable in which four prominent Congo scholars – Filip De Boeck, Nancy Hunt, Emery Kalema, and Erik Kennes – celebrated the influence of Jewsiewicki as a scholar and person on their own studies. 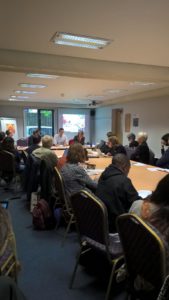 Within the conference programme, the ‘Comparing the Copperbelt’ project sponsored a panel on ‘Knowledge Production in (Post)Colonial Congo’. Its four participants presented case studies of knowledge/power systems arising in relation to social and political change, and anchored in a varied array of institutions and contexts. Romain Landmeters first took the floor with a paper on the ethnographic production of Belgian magistrates in colonial Congo. He demonstrated how their interest in so-called “customary” laws influenced colonial judicial practices in Central Africa. He was followed by Amandine Lauro, who presented a paper on intelligence testing and psychologie indigène in late Belgian Congo. The works of two scholars with differing views and backgrounds – André Ombredanne and Robert Maistriaux – allowed Lauro to highlight intellectual debates over ‘race’ and ‘intelligence’ that troubled the colonial environment in the run-up to independence. She will delve into more details of her current research in a forthcoming Copperbelt blogpost.

From the ‘Comparing the Copperbelt’ project, the third speaker Benoît Henriet offered his initial findings on knowledge production in human and social sciences under President Mobutu. In the 1970s, Katanga hosted a vibrant community of anthropologists, linguists and historians investigating the region’s thriving urban and working class culture. However, their pioneering research on everyday life, popular arts and memories of colonialism could not be sustained in the following decades, marked by a declining mining economy and brutal party-state rule. Finally, Prof Nathalie Tousignant filled in for the unfortunately absent Prof Donatien Dibwe dia Mwembu (see below), presenting his paper on the work of the University of Lubumbashi’s Observatoire du Changement Urbain. Established in 2000, this research centre has produced pioneering works at the crossroads of anthropology, history and cultural studies. The Observatoire’s activities are nevertheless broader than these academic outputs: it also closely collaborates with local art centres, to share vernacular histories of Lubumbashi with a vast array of local audiences. The panel ended with a general comment given by Prof Miles Larmer, tying up together the different presentations. 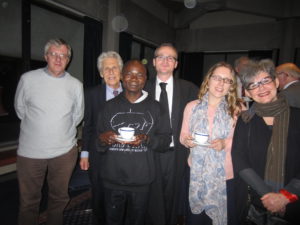 Although the conference was one of the largest gatherings of Congo scholars, a number of prominent Congolese scholars – including Prof Donatien Dibwe dia Mwembu – were unable to attend due to the UK authorities’ refusal to issue them with visas. This type of discriminatory approach, in which African scholars are denied access to travel to events which European or US based scholars are free to attend, is a growing problem in Europe in general and the UK in particular, and creates the danger that African scholars will be unable in future to participate in the production of knowledge about their own societies. For its part, the ‘Comparing the Copperbelt’ project will hold its next two conferences in Zambia (July 2018) and the DRC itself (July 2019).

A well-attended panel at the conference focused attention on the wider politics of research in and about the DRC. The panel, entitled ‘Whose research? The new Ethical Challenges and Political Economy of Research in DR Congo’ raised vital issues such as academic papers in which Congolese researchers have played a vital role but who are not credited as co-authors; and the representation of Congolese girls in academic and media portrayals of sexual violence.  As we celebrated the success of the Congo Research Network conference, this panel and wider discussions provided a clear reminder not only of the contemporary problems faced by Congolese society but also of the injustices and inequalities that perennially affect our intellectual work.